I blogged on the ‘Double Irish’ in 2014 and that this tax arrangement would be ended fully within four years.

Yesterday the European Commission ruled that a tax deal between the Irish government and Apple amounted to illegal state aid with Apple being ordered to pay a record-breaking €13bn (NZ$20bn) in back taxes to Ireland. Apple, the world’s biggest company, was paying a tax rate of just 1% and in 2014 was paying 0.005% when he usual corporate rate in Ireland is 12.5%. This equates to €50.00 tax for every €1 million earned.

The commission said Ireland’s tax arrangements – Double Irish – with Apple between 1991 and 2015 had allowed the US company to attribute sales to a “head office” that only existed on paper and could not have generated such profits. See below: 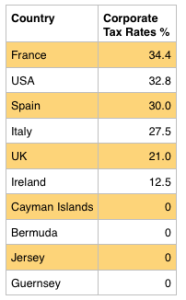 Double Irish is a tax avoidance procedure that some multinational corporations use to lower their corporate tax liability. The strategy uses payments between related institutions in a corporate structure to shift income from a higher-tax country to a lower-tax country. The most popular countries being the Cayman Islands, Bermuda, Jersey and Guernsey as they have corporate tax rates of 0% – see list of Central Government Corporate Tax Rates.

Many US technology companies have taken advantage of a loop hole in Irish corporate law which allowed them to be registered in Ireland without being tax-resident there – see chart below to see how it all works. Google for instance keeps it intellectual property in an Irish company that is tax-resident in Bermuda, which has a zero tax rate of corporate tax. However from January 2015 new companies domiciled in Ireland will also have to be tax-residents there, making the Double Irish impossible. 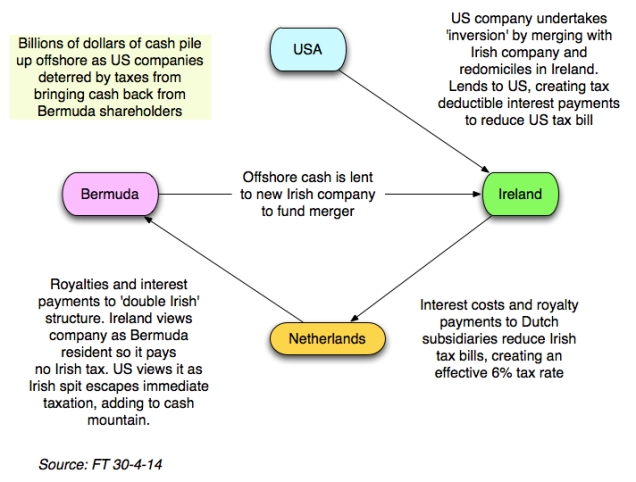