Below is a very informative interview with David Remnick of The New Yorker and the historian Steve Kotkin discussing Vladimir Putin and how authoritarian regimes are pushed into misguided foreign wars. Although the interview is mainly focusing on Russian history there is a mention of the Russian macro economic policy and sanctions. Well worth a listen when you think of what is happening in the Ukraine currently.

It’s a military-police dictatorship. Those are the people who are in power. In addition, it has a brilliant coterie of people who run macroeconomics. The central bank, the finance ministry, are all run on the highest professional level. That’s why Russia has this macroeconomic fortress, these foreign-currency reserves, the “rainy day” fund. It has reasonable inflation, a very balanced budget, very low state debt—twenty per cent of G.D.P., the lowest of any major economy. It had the best macroeconomic management. The New Yorker

The shock is that so much has changed, and yet we’re still seeing this pattern that they can’t escape from,” Stephen Kotkin – Russia expert

For more on Transition Economies view the key notes (accompanied by fully coloured diagrams/models) on elearneconomics that will assist students to understand concepts and terms for external examinations, assignments or topic tests.

Useful video from DW which looks at China which over 40 Years ago opened up its economy to the rest of the world. Although Chinese President Xi Jinping vowed to press ahead with economic reforms he made it clear that Beijing will not deviate from its one-party system or take orders from any other country. China has a system of market socialism in which the political system of communism exists in parallel with market capitalism and private ownership. The Irish Times Beijing correspondent Clifford Coonan makes some very good points.

A new part of the AS Level syllabus in 2016 is Transition Economies. What have been the formidable challenges facing eastern European countries (command) embracing capitalism? Here are some thoughts as well as an informative video from the IMF:

Now there is Chinese version of the debate:

Justin Lin (Keynes) versus Zhang Weiying (Hayek) – both are Professors at Peking University. Lin is on the right of the image below. 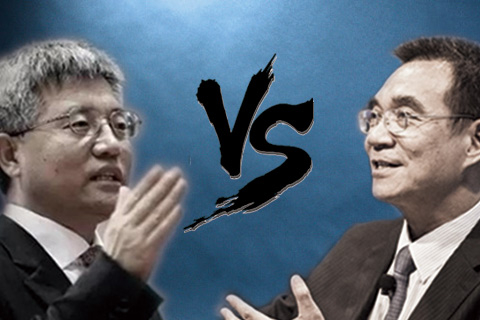 Their latest debate is about industrial policy and the concept that the government can set the example of how to run successful industries – in the 1980’s textiles and today renewable energy. Although China’s growth record would seem to justify this some have seen these state run industries produce little innovation. Lin believes that countries that have a comparative advantage should receive help from the government whether it be in the form of tax cuts or improved infrastructure. Furthermore, because resources are limited the government should help in identifying industries which have earning  potential. This assistance includes subsidies, tax breaks and financial incentives — aimed at supporting specific industries considered crucial for the nation’s economic growth.

Zhang sees this industrial policy as a failure in that he believes government officials don’t know enough about new technologies.  He uses the example in the 1990s, when the Chinese government spent significant money on the television industry only for the cathode ray tubes to become outdated. He is also concerned about industrial inertia with local officials following the central government’s direction which tends to lead to an overcapacity. Zhang, however, credited the free market — not politically motivated government subsidies — with game-changing innovations that benefit society eg. James Watt and the steam engine, George Stephenson’s intercity railway, and Jack Ma’s innovative online marketplaces under Alibaba.

China’s ongoing transition to a market-based economy has relied on labour, capital and resource-intensive industries. But the transition’s negative side effects have included structural imbalances and excess capacity in certain sectors. Moreover, some state-owned enterprises such as telecoms have been challenged by disruptive innovators, such as social networks.

Zhang said industrial policy can foster greed. For example, companies may collude with government officials to win special favours. And policymakers can make mistakes, given that even the most well-informed intellectual cannot always predict market trends. Other economists have contributed to the debate stating that a lot of the most successful companies have not had any government assistance in their early years.

However the debate is sure to continue – what works best ‘Markets or Governments’?

Here is another documentary type movie which has had some very good reviews. Produced by the Directors of the award winning documentary “Black Gold”.

On the front line of China’s foray into Africa, the lives of a farmer, a road builder, and a trade minister reveal the expanding footprint of a rising global power. A historic gathering of over 50 African heads of state in Beijing reverberates in Zambia where the lives of three characters unfold. Mr Liu is one of thousands of Chinese entrepreneurs who have settled across the continent in search of new opportunities. He has just bought his fourth farm and business is booming.

In northern Zambia, Mr Li, a project manager for a multinational Chinese company is upgrading Zambia’s longest road. Pressure to complete the road on time intensifies when funds from the Zambian government start running out.

Meanwhile Zambia’s Trade Minister is on route to China to secure millions of dollars of investment.

Through the intimate portrayal of these characters, the expanding footprint of a rising global power is laid bare – pointing to a radically different future, not just for Africa, but also for the world.

The Economist recently had a special report on “State Capitalism” and although it is a long read here are some prevalent points which could be used in AS or A2 essays especially in the discussion parts of questions.

Basically state capitalism attempts to combine the control of the state with the potential of capitalist system. It relies on the government to select and fund organisations which it sees as potential successes and uses the capitalist toolbox of raising finance through the stockmarket and adopt globalisation. Historically this was type of system was evident in Japan in the post WWII period as it started to rebuild its economy. However one only needs to look at China to see the success of state capitalism – over the past 30 years its economy has:

– grown on averge 9.5%
– international trade has grown by 18% in volume terms
– GDP has more trebled in the last 10 years to $11 trillion
– it has over taken Japan as the second largest economy
– it has over taken the US as the world’s biggest market for consumer goods

A key point in these achievements is that the Chinese government is the biggest shareholder in the country’s 150 biggest companies and manages and incentivises thousands more.

State capitalism is also very prevalent in big firms. The 13 biggest oil firms which supply 75% of all oil reserves as state backed. Some other examples from The Economist include:

Remember the above are very much emerging economies and make up 3 of the countries in the BRIC group. Also the Crysler building in New York is owned by Abu Dhabi and Manchester City football club is now owned by Qatar. The Chinese have a phrase “The State advances whilst the private sector retreats”

Currently doing economic systems with my AS Level class and came across a DVD entitled “China’s Capitlist Revolution” (BBC) which is also on YouTube. It covers the radical movement in China from a economic communist system to that of the free market. China has maintained the political system of communism but embraced the economic system of capitalism – often alluded to as Market Socialism. Some very interesting facts including a factory that would complete their yearly quota in 3 days.

A few days have past since my last post – I’ve been on holiday where there was no Internet access. Here is an interesting gaphic from The Economist where you can input data into their interactive chart to predict when China will overtake the USA as the world’s major economy. Click here to go to the page on The Economist site.

Our best guess for the next decade is that annual real GDP growth averages 7.75% in China and 2.5% in America, inflation rates average 4% and 1.5%, and the yuan appreciates by 3% a year. Plug in these numbers and China will overtake America in 2019. But if China’s real growth rate slows to an annual average of only 5%, then (leaving the other assumptions unchanged) China would become number one in 2022. Please place your own bets.

Asia is regaining the economic dominance it enjoyed a millennium ago – but it still has some way to go. Here is a really good video graphic from The Economist.

China has now overtaken Japan as these second largest economy in the world behind the USA. However, despite the huge development in infrastructure and modern conurbations China is still a developing country. Its GDP/capita last year was US$3,600 compared with Japan’s which was US$37,800. Between 2000 – 2008 Japan’s economy grew 5% compared to China’s 261%. Astonishingly GDP growth in China was 11.9% over the last quarter and over the last few years it has weathered the financial crisis very well. Some economists are uneasy about China’s reliance on exports and there is a need to increase local consumption to keep industry and GDP moving. But wage growth has been limited relative to GDP so one wonders how domestic consumption can increase at the rate required. The video clip from Newsy.com is quite informative. They source news from all the main media outlets.

On 11th January 2010 Chile accepted membership of the Organisation for Economic Cooperation and Development (OECD) proof that Chile is one of the strongest democracies in the world. It is the first country in South America, and 31st overall, to be a member of the international organization. The fact that it has been accepted into the Paris-based club ahead of Brazil, the continent’s emerging political and economic powerhouse, is a source of pride for the Andean nation.

The OECD was established in 1961 with a mission to bring together governments “committed to democracy and the market economy,” to encourage sharing policy experiences and to promote economic growth and development.

Such a transition from developing to developed country last happened more than a generation ago eg. Ireland and South Korea. No one is exactly sure of the timing for Chile. But economists say this country of 17 million will become the first Latin American country to switch categories sometime in the next decade. For much of the 20th century, Chile’s copper-based economy staggered between by boom-bust cycles. Today, Pinochet-era reforms such as a policy of privatisation and low import tariffs remain in place. While Chile made the largest savings in the region – see below: 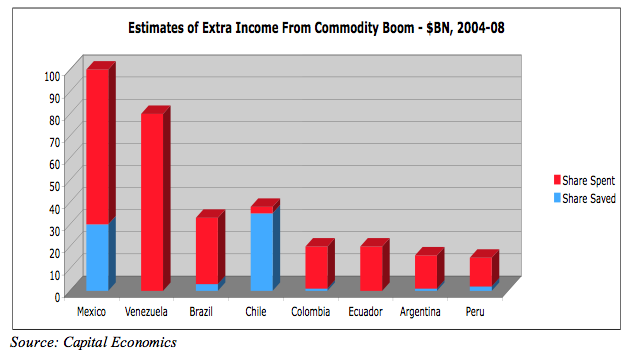 Chile consistently ranks as the least corrupt government in Latin America and under new president Sebastián Pinera one wonders if there will be many changes to the free-market policies that have cemented Chile as a beacon of economic stability in the emerging world. However, there is no doubt that the private sector will be very prominent in furthering economic growth in the world’s top copper producer, promising to revamp government businesses and introduce further tax breaks to create employment.