Teaching ethics to my Yr 10 class I have used the sub-prime crisis as an example. As with behavioural economics the conventional view of finance assumes that markets are efficient and that the price of shares, bonds and other financial instruments are a reflection of the fundamental economic values that they represent. Behavioural finance is all about understanding why and how financial markets are inefficient. If there is a difference between the market price of a share or bond and its fundamental value then in conventional economics no one can make money in financial markets by exploiting the difference.

In July 2007 a loss of confidence by US investors in the value of sub-prime mortgages caused a liquidity crisis.  Sub-prime mortgages were loans that were high risk and many mortgage holders unable to meet their  repayments. The mortgages were pooled into what was know as a Collaterised Debt Obligation (CDO) which were sliced into tranches – safe – okay – risky. Investors tended to buy safe tranches as they were rated AAA by the rating agencies. However the rating agencies were very generous in their assessment of these investments as they were paid by the banks who created the CDOs. Banks also were able to take out insurance on the CDO even if they didn’t own them. This was called a Credit Default Swap (CDS).

The flow chart (above) and video (below) shows how Goldman Sachs sold a CDO called Timberwolf to investors and proceeded to bet against that investment by buying insurance from AIG so that when the CDO failed they got a pay out from them. As you maybe aware AIG sold a lot of CDS’s and ultimately had to be bailed out by the US government. However a significant portion of the bailout money went to the banks that had created the problem.

Below is another very good clip from the Big Short that explains how the mortgage market brought down the financial system. Good references to CDO’s in which celebrity chef Anthony Bourdain compares fish to finance?

I enjoyed reading John Cassidy’s article in The New Yorker about America’s justice Department charging Standard & Poor’s with fraud over the rating of mortgage backed securities between 2004-2007. The case revolves around the activities of two teams at S & P:

These investment were based on subprimes mortgages taken out by borrowers who couldn’t pay – NINJA’s Non Income No Job or Asset. The Wall Street firms that produced these securities paid rating agency S & P big fees to rate them:

The government claim that:

1. 2004 – 2007 S & P deliberately limited, adjusted, and delayed” changes to its statistical models and ratings criteria for subprime securities that would have resulted in the firm issuing lower ratings.
2. March and October of 2007, when it was perfectly clear that the housing bubble had burst, the firm “knowingly disregarded the true extent of the credit risks associated with” securities it rated.

One S & P employee was quite explicit in his views of what was happening in the RMBS market. In March of 2007, a person identified as “Analyst D,” who had studied a series of RMBS. issued in 2006, wrote an e-mail to several colleagues with the subject line “Burning Down the House—Talking Heads.” This is what it said:

Hold tight
CDO biz—has a bother
Hold tight
Leveraged CDOs they were after
Going—all the way down, with
Subprime mortgages
Own it
Hey you need a downgrade now
Free-mont
Huge delinquencies hit it now
Two-thousand-and-six-vintage
Bringing down the house

See the live version with David Byrne and Talking Heads – 1984

Another interview with Paul Krugman this time with Paul Solman of PBS. Krugman describes the events in 2008 as the Wile E. Coyote moment – a character in the Road Runner cartoons. That is, according to the law of cartoon physics, it is only when you look down that you realise that there is nothing below. Krugman likens this to the situation where housing bubble had started to burst and banks called in loans to be repaid.

But when everyone everybody tries to pay down debt at the same time what happens is the economy shrinks, prices of assets fall and people lose their jobs, people lose their income, profits crash, and everybody ends up being in a worse financial position than they were before because they’re, they’re… When everyone tries to do it at the same time, the result is mutual destruction.

Below is a chart which looks at the dangers of over optimism in markets – Keynes referred to this as ‘Animal Spirits’. Nobel economist Daniel Kahneman describes overconfidence as the engine of capitalism but there are concerns whether the success of entrepreneurs in markets is due to their skill or the fact that a lot of luck is involved. One thing is for sure – when they are successful they tend to become overconfident about their ability to survive a crisis. This in turn inflates asset prices which makes asset buyers more optimistic about borrowing more money and banks more confident of repayment. However, as we have seen it all comes to a head and the bubble bursts. 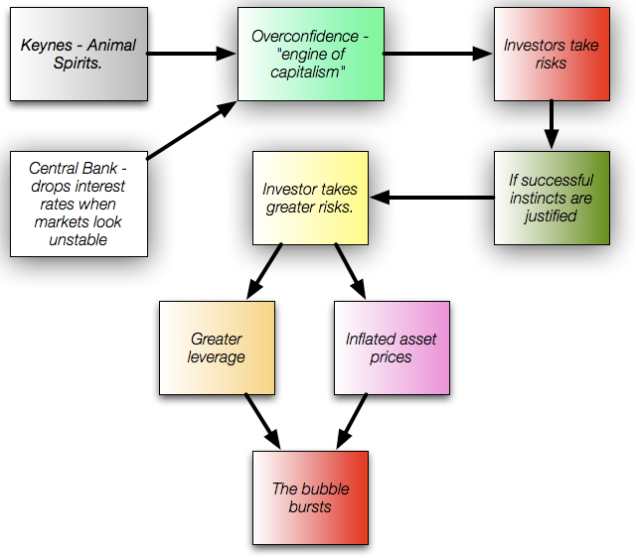 Moral Hazard refers to the presence of incentives for individuals to act in ways that incur costs that they don’t have to bear. An example would be the incentive to find a job given the existence of social welfare benefits for the unemployed. Moral Hazard is a market distortion based on imperfect information and fails to distinguish between those that are honest and those that take advantage of the incentive.

Recently there have been numerous examples of moral hazard especially in the US. Shaila Dewan in the New York Times wonders why ordinary American taxpayers should rescue the banks when they caused the downturn that the economy is going through. The specter of moral hazard haunts a basic tension in American life: to what extent are people responsible for their own problems? The more trouble you’re in, moral hazard suggests, the less we should help. With the debacle of the sub-prime housing bubble bankers have indicated that assisting mortgage holders would encourage those who can pay to act as if they are unable to. Furthermore it would also make those that have a financial commitment rather irresponsible. Last month the Department of Housing and Urban Development negotiated a $26 billion deal with the banks regarding foreclosure abuses. But homeowners who have prudently paid their mortgage payments might wonder why their neighbour, who has been unable to honour their financial commitment, should be getting help.

In 1996 Tom Baker, a law professor at University of Pennsylvania, wrote in “On the Genealogy of Moral Hazard” that:

“Moral hazard signifies the perverse consequences of well-intentioned efforts to share the burdens of life, and it also helps deny that refusing to share those burdens is mean-spirited or self-interested.”

However policies in the US have been trying to reduce the moral hazard issue. Countrywide have offered support to people that have defaulted on their mortgages instead of those who have just taken on dodgy loans. But wouldn’t that just encourage the latter to default? What is needed is more regulation of the banking sector – eg the Dodd–Frank Wall Street Reform and Consumer Protection Act passed in 2010.

Below is a graph showing the frequency of the term “Moral Hazard” between 1960-2000 using the Google ngram. 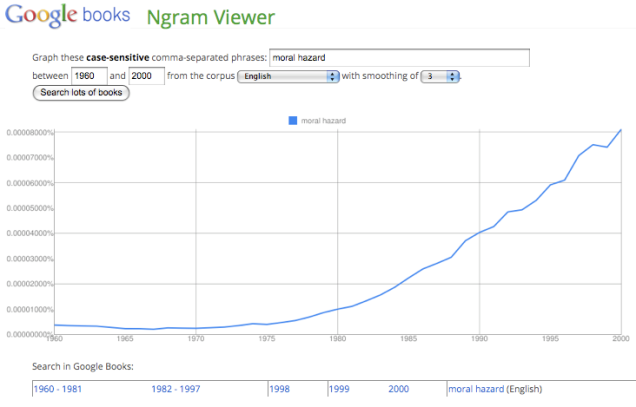