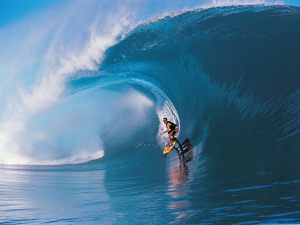 Surfing is a growing sport and with it comes the demand for that wave that gives you the most utility. As stated in The Economist surfers’ behaviour is similar to that of the tragedy of the commons. In trying to catch a wave surfers informal queue for their turn and their seems to be informal property rights as to when you can take your turn.

To formalise this quota system an alternative is to grant ownership rights to the waves. This has been tried in Fiji and prices reached $4,000 for a day of surfing the “Cloudbreak”. Cloudbreak is a unique wave, in that it was actually regulated and owned by a surf resort. The only way to surf Cloudbreak was to check into the Tavarua Surf Resort in Fiji. The wave is about a mile from Tavarua Island itself, requiring a boat ride to get out there. However by 2010 the wave was open to the public and therefore became once again became a free service. Much of the African coast has the right kinds of waves that will increase the utility of surfers and are quite remote and free of the crowds. In fact the Ivory Coast and Senegal being close to pareto optimality – an empty wave.

After a goal feast at the weekend in the English Premier League (EPL) I thought it appropriate to keep the same sport and look at the European labour market for soccer players. The table below from The Economist shows European clubs are keen hirers of foreign talent. Cyprus are the biggest importers: more than 70% of players in the Cypriot first division are foreign. However, England’s Premier League has the largest number of foreigners (even without the 50 or so players from elsewhere in the British Isles). Among Europe’s leading leagues, France’s Ligue 1 and Spain’s Primera Liga rely most on domestic talent. France, indeed, is the biggest intra-European exporter, with 261 players. But Brazil is easily the biggest supplier overall: 577 Brazilians are active in Europe’s top divisions.