* high levels of indebtedness in the dairy sector
* the imbalances in the housing market,
* the potential effects of a slowdown in the Chinese economy,
* the banking systems reliance upon offshore funding.

Since the Financial Stability Report was published, risks in the dairy sector have increased due to the reduction in the current season’s forecast payout. International dairy prices are about a third less than they were a year ago, as a result forecast sector returns for the 2014/15 season are much less than the previous season. Fonterra’s latest Global Dairy Trade auction undertaken in early May reported a further 3.5 percent fall in international dairy prices on a trade weighted basis. The Reserve Bank warns that forced sales of farms could rise if dairy payouts remain low, though farmers would go to great lengths to keep paying their loans. Many highly indebted farmers are facing negative cash flow and lower milk prices will only accentuate the problem.

The graph below shows the actual milk price payouts for the largest New Zealand dairy companies for the last five seasons, along with the forecast payout figure for the current season. 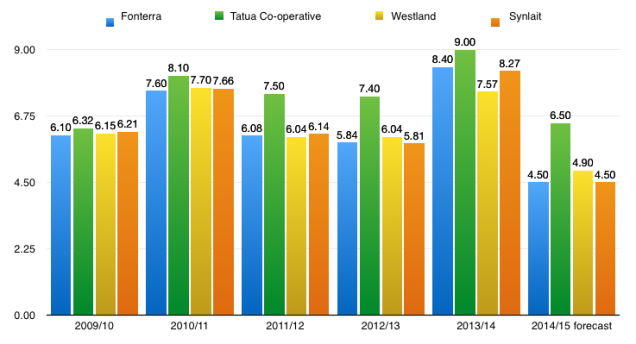 The Reserve Bank Governor Graeme Wheeler recently gave a presentation on the significance of the dairy industry to the New Zealand economy. A part of the presentation focused on the importance elf China as an export market for New Zealand’s Primary industry.

China’s economic growth over the past 35 years is unparalleled in modern times. Averaging 10% over the last 3 decades growth has slowed but it still averaging approximately 7.5%. China’s growth has been driven by several factors:

* high domestic investment and savings ratios,
* sizable foreign direct investment,
* the impact of catch up technologies,
* the massive shift of labour from subsistence agriculture to higher productivity roles in urban industrial production,
* on-going market based reforms
* membership of the World Trade Organisation since 2001.

China is New Zealand’s largest export market for every agricultural commodity except beef (where it is our second largest market behind the United States). It purchases a third of New Zealand’s dairy exports (figure 6).
Figure 6: Share of primary exports to China (annual total)

With the rural – urban shift in China incomes will inevitably rise which means consumption of dairy products will increase. Urban consumption of diary is about 3 times that of their rural counterparts.

However China faces several difficult challenges in the years ahead. These include:
a declining labour force and aging population;

* rebalancing the economy towards stronger consumption and higher value added exports; meeting infrastructure demands;
* addressing income inequalities in the central and western regions;
* tackling corruption and environmental issues;
* implementing the ambitious set of reforms announced in the third Plenum; and
* managing the very rapid build-up in local government and corporate debt over the past five years.

India, rather than China, is forecast by the Australian Bureau of Agricultural and Resource Economics and Sciences to be the major new market opportunity for dairy exports in the future. The Bureau projects global demand for dairy products to increase:
2007 – USD7 billion in 2007
2050 – USD85 billion (in 2007 USD).

By 2050, India’s import demand for dairy products is projected to be USD48 billion – more than three times China’s USD15 billion, given the projected growth in China’s domestic production. World Bank projections suggest that China and India could be the world’s largest and third largest economies at that time. A risk to the New Zealand Dairy Industry is that a strong competitor enters the Chinese market and threatens our market share. In 2013 New Zealand supplied over 70 percent of China’s dairy imports.