In Unit 3 of A2 CIE economics course you will no doubt have come across externalities – see graphs below. In simple terms the cost to the consumer must also be accompanied by the external costs (referred to as externalities) which is normally not paid by the consumer. Externalities are common in virtually all economic activities. They are defined as third party (or spill over) effects arising from the production and/or consumption of goods and services for which no appropriate compensation is paid. 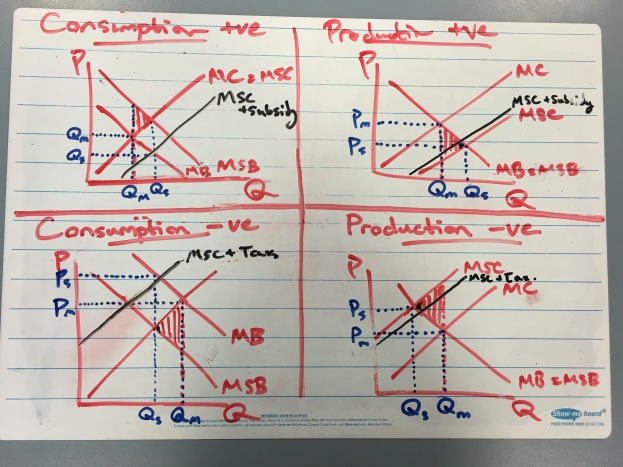 Externalities can cause market failure if the price mechanism does not take into account the full social costs and social benefits of production and consumption. The study of externalities by economists has become extensive in recent years, not least because of concerns about the link between the economy and the environment.

This all seems very straight forward as you would assume the external cost (externality) of driving a car (emissions) would be added to the private cost of running the car (petrol etc). However carbon taxation is politically elusive as only 20% of global emissions are covered by schemes that put a price on carbon and only 1% of emissions subject to such schemes face a price as high as $40 per tonne of carbon dioxide. The Green New Deal proposes to a move to a 100% clean and renewable energy within a decade or two, and to zero net emissions by mid-century. Those who support the idea are sceptical about costs and funding as decarbonising the economy will require some serious capital.

For the Green New Deal to work it must mobilise a majority that are more passionate than the remainder. A carbon tax with a dividend may be appealing but the financial benefits are small when divided by the number of voters. Remember that an associated tax would encourage an aggressive response from wealthy fossils-fuel firms. A Green New Deal, in contrast, might promise sufficient goodies to organised interest groups, such as labour unions and domestic manufacturers, to gather a winning political coalition.

Some see the Green New Deal is something more radical. Roosevelt saw the Depression as both a threat to liberal democracy and the product of an economic system that put profits ahead of the welfare of the working man. Similarly, left-wing activists view climate change as the result of unbridled capitalism. They aim to solve it by redistributing economic and political power.

The December 2015 edition of the New Internationalist discussed 10 Economic Myths that need to be addressed especially after the GFC. Below is the list and the NI goes through each in detail – click here to go to the NI website.

Myth 1: Austerity will lead to ‘jobs and growth – ‘ It’s wrong to sell austerity as a cure for economic woes
Myth 2: Deficit reduction is the only way out of a slump  - Don’t rely on those who caused the crash to resolve it
Myth 3: Taxing the rich scares off investors and stalls economic performance  – Taxation creates prosperity just as much as private enterprise
Myth 4: Economic migrants are a drain on rich world economies  – Migration follows a demand for labour and benefits the receiving country
Myth 5: The private sector is more efficient than the public sector  – There is no evidence of greater efficiency
Myth 6: Fossil fuels are more economically viable than renewables  – Not if you look at the environmental costs
Myth 7: Financial regulation will destroy a profitable banking sector  – Why should financial markets be accountable only to themselves?
Myth 8: Organized labour is regressive –  It can be argued that the opposite is actually true.
Myth 9: Everyone has to pay their debts  – We need debt management not reduction
Myth 10: Growth is the only way  – why we need to find another way, fast.

Although it is repetitive in places especially when they talk of debt and austerity it does provide some valid arguments. I think that the last myth ‘Growth is the only way’ is of particular importance in that GDP growth at all costs has led to wasteful resource use, particularly by the wealthier countries, on an unparalleled scale and without a backward glance. It is often noted that the economy is a subset of the ecological system, but equally there seems to be a belief that nature can cope with anything we throw at it. However, an assessment by the Global Footprint Network indicates we are running a dangerous ecological debt. Currently the global use of resources and amounts of waste generated per year would require one and a half planet Earths to be sustainable (see graph below). The price to be paid for this overshoot is ecological crises (think forests, fisheries, freshwater and the climatic system), a price that is again paid disproportionately by the poor. 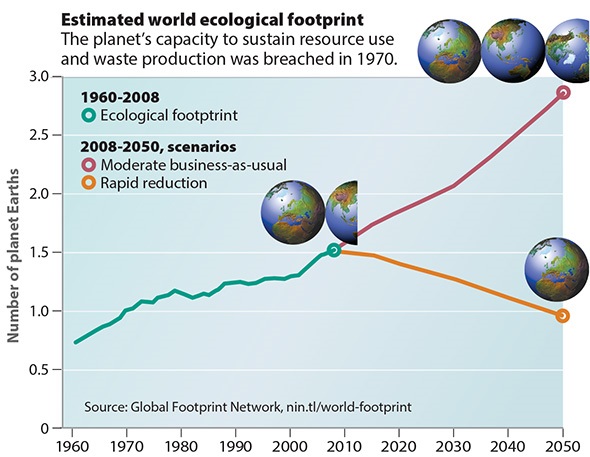