Another good video from Paul Solman of PBS ‘Making Sense of Financial News’.

In his new book, “The End of Alchemy,” Mervyn King still worries that the world banking system hasn’t reformed itself, eight years after its excesses led to collapse. He states that it’s easy with hindsight to look back and say that regulations turned out to be inadequate as mortgage lending was riskier than was thought. Furthermore, you are of the belief that the system works and it takes an event like the GFC to discover that it actually doesn’t.

Paul Solman asks the question that a large part of the problem that caused the GFC was the Bank of England and the US Fed were not able to keep up with the financial innovation that was going on in both of these countries. King refutes this by saying that there were two issues that were prevalent before the GFC:

Central banks exist to be lenders of last resort. Problem: Too big to fail. And that’s what began happening in England, just like America, in the ’80s and ’90s. There needs to be something much more robust and much more simple to prevent the same problem from happening again. King makes two proposals:

He finally states that the Brexit vote doesn’t make any significant difference to the risks facing the global banking system. There were and are significant risks in that system because of the potential fragility of our banks, and because of the state of the world economy.

Since 2008 the financial sector has been the target for a lot of criticism especially when you think the sub-prime mortgage crisis, the bailing out of banks and the recent manipulation of interest rates and currency rates. The Journal entitled Nature had an interesting piece of research on the banking culture and how it primes people to cheat

Individual bankers behave honestly — except when they think about their jobs.

A study of investment managers and traders at a major international bank suggests that the financial industry’s culture encourages dishonest behaviour, but that the individuals themselves are not inherently dishonest.

In the latest study, published online by Nature magazine, researchers enlisted the help of 128 employees from a large international bank. At the start of the tests, half the participants were quizzed about their jobs and their company, to prompt them to think of their identity as bank employees. The other half answered questions about their hobbies.

The first group reported flipping heads 58.2% of the time — significantly higher than would be expected by chance alone. The control group reported tossing 51.6% heads.

The team tried to replicate the pattern in other groups of people — for example, priming students to think about banking. But they did not see the same effect on the participants’ honesty levels. The results show that this banking-related priming effect seems to be specific to people who work as bank employees, suggesting that the culture of the banking sector is to blame.

The recent LIBOR crisis that hit the headlines last week has shown that once again banks which were once reknowed for their prudence and considered boring have now been replaced by greed and reckless risk-taking. According to the WSJ, in the early years of banking an institution needed to attract deposits from the public and therefore cultivated prudence and integrity and publicised this to potential investors. Lets face it being boring was potentially a selling point for bankers. During the 20th century this changed and you only need to look no further than the pre-crisis advertising in which the rhetoric wasn’t one of care and honesty but a willingness to lend to anyone.

However in today’s environment do depositors care so much about the prudent and trustworthiness of banks? Do they actually benefit from this? When you have a situation that the banks become “too big to fail” and are bailed out by the government there seems to be nonchalant attitude amongst depositors to the integrity of banks. This then means that the banks have little incentive to care either. It seem that banks gain little advantage over their competitors from being prudent. In fact depositors can gain from the banks making risky uses of their money. As the government will guarantee their money they then can profit from higher rates of interest by the banks being prepared to make riskier investments. This has encouraged investors to favour risk-taking banks.

You can’t not be aware of the Libor scandel that has been dominating the media in Europe over the last few days. So what is the LIBOR?

The London Interbank Offered Rate is the average interest rate charged by leading banks in London when lending to other banks. It is a benchmark, along with the *Euribor for interest rates all around the world. This includes more than £300 trillion (NZ$600 trillion) of financial products such as credit cards, mortgages, financial derivatives like CDO’s etc. In the run-up to the financial crisis, traders are said to have attempted to have attempted to manipulate the rates to boost their bonuses or protect their jobs. At the peak of the financial crisis, they artificially lowered rates to hide the stress on the banks’ balance sheets.

Dan Davies described the LIBOR as similar to credit ratings – started as a market tool, then had a huge structure built on it, & never grew regulatory structure. However it is ironic that without the LIBOR scandel the borrowing public would have had to pay higher interest on loans. But the lower interest rates increased the amount of borrowing which increased house prices and started a speculative bubble. The cartoon is by Pugh of The Times in London.

* rate at which Eurozone Banks offer to lend unsecured funds to other banks in the euro wholesale money market.

Here is a really good graphic from the Wall Street Journal. Moody’s Investors Service has been reviewing since February 2012 the credit ratings of more than 100 European banks for possible downgrade. The graphic below tracks Moody’s long-term debt ratings for the largest of these banks. Banks are sized by total assets. Shading indicates the bank’s credit rating — the deeper the red, the lower the rating. Click the link below to go to the website.

There was an informative piece in the NZ Herald on Saturday which alluded to the fact that, according to PWC, the emerging economies’ banking sectors are expected to outgrow those in the developed economies by an even greater margin than what was thought.

By 2036 (see graph below) the banking assets and profits of the the E7 countries are expected to exceed those of the G7 countries. One of the main reasons for this was that the emerging economies were not as exposed in the financial crisis to the alphbet soup of investment vehicles – CDO’s, CDS’s etc. Also their banking systems are in a much more stable condition to fund long-term growth within their countries. The table shows projections of when emerging economies will overtake other G7 countries. PWC project that India could become the third largest domestic banking structure by 2050 after China and the US, but ahead of Japan, the UK and Germany. 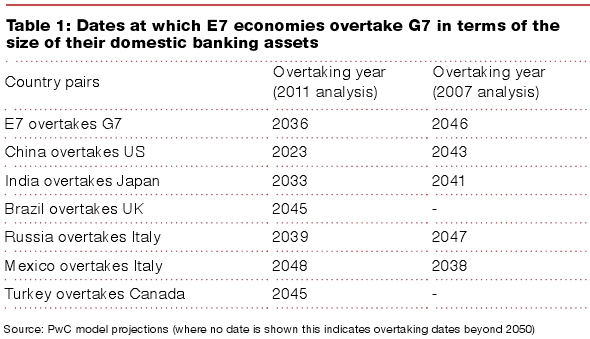 “New Zealand major banks are structurally sensitive to wholesale funding market conditions. The major banks have around 40% of their total funding base sourced from wholesale funding, with around two-thirds of this being sourced offshore. Over the past 6-months, the major banks have enjoyed relief in funding pressure due to slower loan growth and higher customer deposit growth. The increased savings rate was supported by lower credit and consumption growth combined with moderate income growth. “ However, Moody’s said it believed this was not sustainable in the long-term.

See the TVNZ 7 interview with Bernard Hickey of interest.co.nz