Back in July The Economist had an article in its ‘International’ section on updating or repairing the welfare state. They identified 3 major challenges faced by welfare states in rich countries. 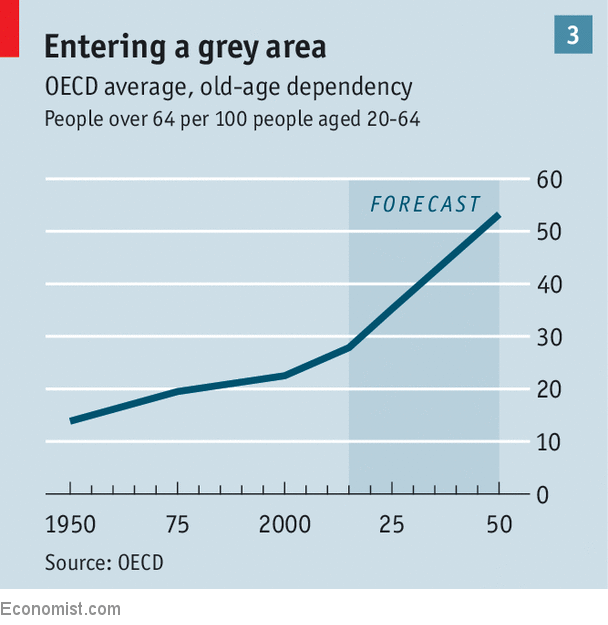 The rapid increase in life expectancy over the past century has become an issue for governments around the world in terms of financing pensions, social care, and health care – see graph. With the political opposition to a reduction of public services a solution could be to increase the tax base by mobilising the potential workforce so that a greater share of those of working age actually work, while another can be found in productivity growth. Yet another route is raising the retirement age in response to longer and healthier life expectancy. The challenge of funding the pension system appears particularly daunting, with an increasing share of the population spending a longer period of time in retirement. Although immigration is a problem it may be a solution to ageing as economic research from the UK and Denmark has shown that since 2002 EU migrants have contributed much more in taxes than they have cost in public services.

Immigration poses another challenge to the welfare state. In 1978 Milton Friedman argued that you could have open borders or generous welfare states open to all, but not both, without swamping the welfare system. Moreover, taxpayers are more tolerant of benefits that are seen to look after “people like them”. Evidence suggests that there has been tension between diversity and generosity.

Welfare chauvinism has been evident in many countries – France, Sweden, Denmark – have curbed the rights to benefits of non-EU migrants since 2002. Reforms in the USA in 1990s limited illegal immigrants’ access to benefits and of late Sweden has limited paid parental leave for new immigrants and cut support payments to some asylum-seekers. Moreover, attitudes towards immigrants are volatile and swayed by the political climate. In 2011, for example, 40% of Britons said immigrants “undermined” the country’s cultural life, and just 26% said they enriched it. By last year, in the wake of the Brexit vote, only 23% went for undermined, compared with 44% for “enriched”.

Recent research by the OECD in seven of its members estimated that 60% of the working-age population had stable full-time work. Of the other 40%, no more than a quarter met the typical definition of unemployed: out of a job but looking for one. Most had dropped out of the labour market or worked volatile hours. In many countries when the jobless do find work, their benefits are withdrawn in such a way as to create a high effective marginal tax rate. Nearly 40% of the unemployed in the OECD face a marginal rate higher than 80% on taking a job. Welfare recipients also often suffer from bureaucratic traps. For example, some have to wait weeks between losing a job and receiving benefits.

Universal basic income (UBI) may be one way to avoid such problems. It takes many very different forms, but at its heart it replaces a plethora of means-tested benefits with a single, unconditional one, paid to everyone. Scotland and the Netherlands are running experiments involving UBI and many others are set to follow. But in no country is it yet the foundation of the benefits system for working-age adults.

The OECD recently modelled two forms of basic income. Under the first, countries’ spending on benefits was divided equally among everyone—a revenue-neutral reform. Under the second, everyone would receive benefits equal to the current minimum-income guarantee, and taxes would rise to pay for it, if necessary.

The results, as ever in welfare policy, reveal a “trilemma” between:

1. The overall cost,
2. How much it alleviates poverty
3. Its effect on work incentives.

They also show that the effects of introducing basic income vary hugely based on what welfare system it would partly replace. Countries such as Italy, Greece, Spain, Austria and Poland all spend more on welfare for the richest 20% than for the poorest. For them, spreading benefits more evenly would benefit the poor, even under a revenue-neutral model. But in countries that target welfare spending on the poor (such as Britain), UBI would either lead to large tax rises, to maintain a minimum income for everyone, or see benefits cut for the worst-off.

A more realistic alternative for many countries may be a negative income tax (NIT). Championed by Friedman, the NIT means that, below a certain income threshold, the taxman pays you. As you earn more, tax kicks in, tapering your income. The effect is similar to a basic income, especially since most UBI models assume that rich people would have to pay more tax to afford them. A NIT, however, is more efficient in that it does not give the rich a stipend only to take most of it back in tax.

Versions of a NIT have been part of welfare policy in Britain and America for decades, in the form of tax credits that are paid to those working on low incomes. Britain’s Universal Credit, a (sputtering) attempt to merge six working-age benefits into one, takes the approach further. A recent analysis by the OECD finds this a better way at targeting the poor than UBI.