Donald Trump has indicated that the US economy needs a big tax cut to stimulate some growth and aggregate demand –  C+I+G+(X-M). His rationale is that with consumers having greater income they will spend consume more (C) and businesses keeping more of their profits will invest more (I). He is even so confident that the tax cuts won’t put a dent in the overall tax revenue of the government. However economists are suggesting that the US economy is already growing as fast as it can and in order to improve its growth rate it needs to investment in productivity. 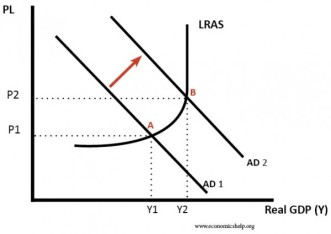 Nevertheless, US tax cuts in the 1980’s under Ronald Reagan proved to be very effective in stimulating aggregate demand but the economic environment then was different to that of today. The 1980’s was an era of stagflation with the US experiencing 10% unemployment and inflation reaching 15%. Since the GFC in 2007 growth has been positive and unlike the 1980’s unemployment has been falling  – from 10% in Oct 2009 to 4.4% in April 20178. Tax cuts are all very well when you have high unemployment but with the rate falling to under 5% companies may find it difficult to respond to the greater demand for goods and services by taking on workers to increase supply. Tax cuts would then lead to an increase in inflationary pressure (see graph) which is turn would prompt the US Fed to increase interest rates. 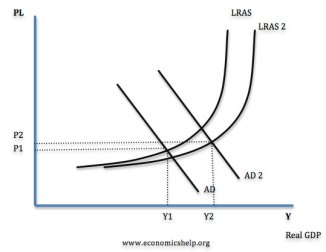 Trump’s plan would also increase the Federal deficit and borrowing from the government. This would put upward pressure on interest rates for the private sector which reduces the potential for further growth. As noted earlier the area that needs to be addressed is productivity, with a shift of the LRAS curve to the right – see graph.