The Economist looked at this area and I thought that I would delve a little deeper. There is no doubt that if you study the costs and benefits of faking an injury there are certain sports where it is percieved as quite worthwhile – i.e. the benefits outweigh the costs. Cost benefit analysis is part of Unit 3 of the AS Level course. What is cost-benefit analysis (CBA)?

CBA can be applied to any decision you make and below is a table outlining the cost and benefit of faking a penalty or injury in particular sports. I see the benefit in soccer of diving in the box and being awarded a penalty outweigh the costs by a significant amount. Firstly, if the appeal for a penalty is turned down it is very unlikely that the referee will administer any punishment to the player faking a foul. In too many cases they are happy to let the game play on as they feel under so much pressure anyway for not awarding it. Whilst in ice-hockey a suspension of either 2 or 4 minutes has acted as a deterrent to those caught “embellishing”. I have put some values in the end column which will no doubt encourage a lot of discussion – remember Warren Gatland, the Welsh coach in the Rugby World Cup, considered informing a player to fake an injury so there would be no pushing in the scrums. This was after their captain, Sam Warburton , was sent off early in semi-final against France. 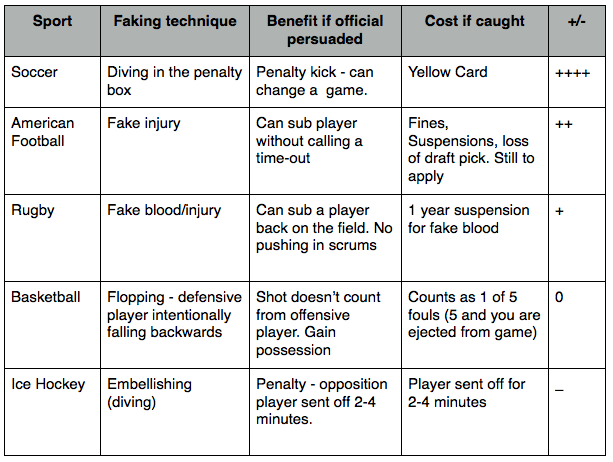 However, with the perceived benefits of diving in soccer it does encourage players to even practice this activity. This reminded me of a great advertisement run by the Guardian Newspaper for the Euro 2004 Soccer Championship – see below