Pope Francis challenged business leaders assembled at the World Economic Forum in Davos to put their wealth at the service of humanity instead of leaving most of the world’s population in poverty and insecurity.

The global economy should grow by 3.2% this year, up from 2.4% in 2013, according to the World Bank. Yet for many, in the developed world and emerging markets alike, the recovery from the worst economic crisis since the 1930s has a phantom-like quality. Many people can’t see an improvement in their quality of life, and the gap between rich and poor is growing.

“Since the global financial crisis, it’s been a race to the bottom in jobs, wages and living standards,” said Philip Jennings, general secretary of UNI Global Union. Central banks have pumped trillions of dollars into the world financial system to stabilize their economies, sending stock markets and real estate prices soaring to the benefit of the wealthy. 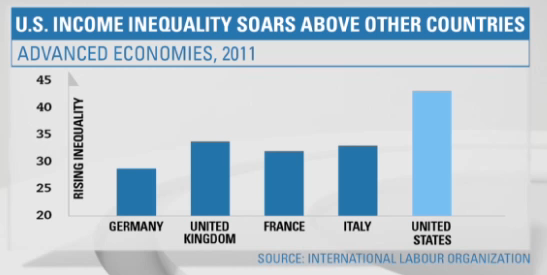 One thought on “Pope talks of Global Inequality”