The Daily Chart in The Economist recently looked at the fastest growing and contracting economies since 1980. The main points:

Fastest Growing: In 2012 Libya with 122% growth came out on top – due to the recovery of oil production. However you must remember that this is a % change from the previous year when the economy contracted by about 60% with the civil unrest and the departure of foreign oil companies. Statistically this creates a smaller base when you calculate % change.

If a country’s GDP shrinks by 60%, it must grow by 150% just to restore its former size. Thus even if Libya fulfills the IMF’s forecast for this year, its GDP will still be smaller than it was in 2010

The Economist also looked at other countries that had fast growth rates but this was predominately due to a disaster of some sort in the preceding year or the discovery of a natural resource.

Equitorial Guinea – In the 1990‘s very poor and depended on cocoa and timber for income. 1996 they discovered oil and attracted FDI. After producing 80,000 barrels per day increasing GDP by 150%.

Kuwait – contracted 41% during the first Gulf War on 1991 but grew 50% the next year as growth started to return. 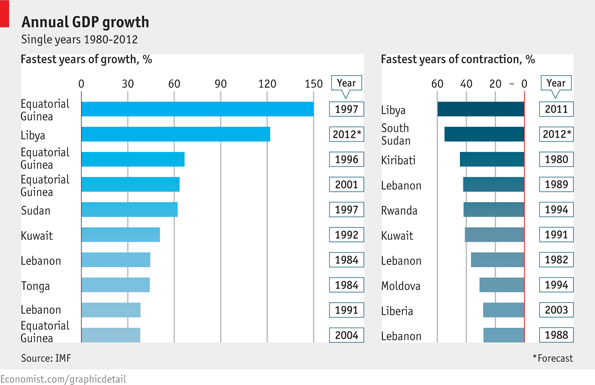