It seems that we currently have a recovery in the global economy that is either like that of a moped or a turbo charged V8. China and India are racing ahead of the more traditional developed countries as they avoided the credit crisis and the exposure to sub-prime mortgages.

Even through the turmoil of 2008 and 2009 the developing economies avoided the housing crisis and never had to bailout their banks or withstand the high unemployment and stagnant growth that plagued their developed counterparts. Some interesting facts from the World bank:

India and China have a huge middle class which is now wishing to acquire all those western products. However, as investors look to emerging markets to deposit their money there is the risk of asset and property bubbles. Brazil has already increased its RRR Reserve Requirement Ratio – see previous post – QE or QT 1st April 2011. In order to soften the impact of inflation these countries could let their currency rise rapidly which would reduce the cost of their imports but this does affect the competitiveness of their exports.

30% of China’s GDP is generated from the export market.

Between 1999 and 2008, US multinationals slashed 1.1 million jobs in the US and added 2.4 million jobs overseas with more than 520,000 in China. In 2010 GM sold more cars in China than at home in the US. However what is more poignant is that of the 2.35 million cars sold in China 99% of them were made locally. It seems that the Brazil, India, and China are the new turbo economies to bring us out of recession.

Below are some useful indicators to show the Mopeds and the V8s of the world economy. 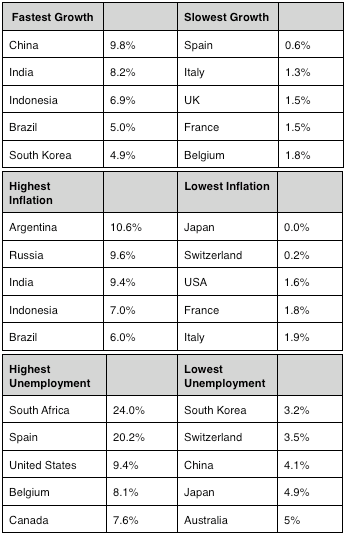