The United Nations measure the development of countries using the Human Development Index. As you maybe aware this consists of three variables:
1. per-capita income,
2. life expectancy and
3. literacy rates.

This index is then used to rank countries by how “developed” they are – 169 countries were ranked in 2010. Below is the top and bottom country.
1. Norway
169. Zimbabwe

The latest Human Development Report identified that in particularly less developed countries there is a poor correlation between economic growth and improvements in health and education The graph below shows that where income has increased the impact on non-income variables (literacy and life expectancy) has been minimal. Source: New York Times – Relationship between economic growth and the non-income components of the Human Development Index, 1970–2010. 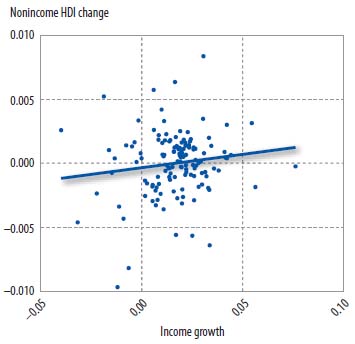 Here’s one example (from the New York Times) of economic growth not translating to development as expected.

Take a revealing comparison between China — the world’s fastest growing economy in the past 30 years — and Tunisia. In 1970 a baby girl born in Tunisia could expect to live 55 years; one born in China, 63 years. Since then, China’s per capita GDP has grown at a breakneck pace of 8 percent annually, while Tunisia’s has grown at 3 percent. But a girl born today in Tunisia can expect to live 76 years, a year longer than a girl born in China. And while only 52 percent of Tunisian children were enrolled in school in 1970, today’s gross enrollment ratio is 78 percent, considerably higher than China’s 68 percent.