The number of people in the US who are in poverty is approaching the levels of the 1960’s. The anticipated poverty rate is expected to increase to 15% from 13.2% which means that 45 million people in the US were poor – this is more than 1 in 7.

The most common measure of poverty in the United States is the “poverty threshold” set by the U.S. government. This measure recognizes poverty as a lack of those goods and services commonly taken for granted by members of mainstream society. The official threshold is adjusted for inflation using the consumer price index. In 2008, the poverty level stood at US$22,025 (NZ$30,174) for a family of four, based on an official government calculation that includes only cash income before tax deductions. Wikipedia

Analysts suggest that the upcoming report on poverty will show:

* Child poverty increased from 19 per cent to more than 20 per cent.
* Blacks and Latinos were disproportionately hit, based on their higher rates of unemployment.
* Metropolitan areas that posted the largest gains in poverty included Modesto, California; Detroit; Cape Coral-Fort Myers, Florida; Los Angeles and Las Vegas.

*this was as a consequence of President Johnson’s war on poverty. 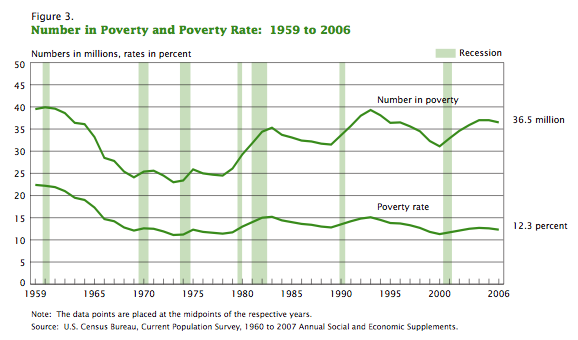